Background: Analog optical soundtracks are the source of sound on film where a light shines through the film soundtrack area to a photo sensor to create the audio waveform. This soundtrack is continuous and contains no intermittence like the picture. There are two basic types of optical soundtracks. Variable density uses varying density to alter the amount of light which the sound sensor receives. Variable area varies the amount of light transmitted through the film by spatially occupying more or less of the soundtrack area. There are different types of variable area, however the principle is all the same.

Problem:  Sound on film as a technology has been around for a long time. Older films are in caring states of aging and decomposition. There are two types of film issues that have made the recovery of sound off of film problematic. First, sound needs to be captured at a constant velocity. When films shrink and decomposed, it becomes hard to capture the sound at a constant velocity because the lack of positional reference from the film. Just as broken perfs and shrinkage can cause movement in the picture, it can also cause problems in the audio. Sound speed for film is 24fps which is (35mm) 90 feet per minute. Many films are not structurally capable of moving at this speed. The second issue that arises is poor sound track printing/quality. Many variable density track are not exposed properly or have been duplicated, causing poor transfer function characteristics. Many variable area tracks printed on color positive have faded just like the pictures. Also poor printing and or application cause low quality sound.

Solution:  Software which will allow the audio to be taken from picture data. This allows for a variety on scanning methods and techniques. In house we use it with our 3K liquid gate archival scanner. The liquid gate can take away many base scratches including the sound area. For variable are tracks, thresholding can be applied to mitigate against poor exposure or application. In variable density the track image can be color corrected to restore its original transfer function. A real time wave form is generated so the user has feedback on what the changes are doing. Once the parameters are set, the software will generate a synchronous 16bit uncompressed .wav file at the sampling rate of that is inputed by the user. 16mm and 35mm have different frequency ranges. Changing the sampling rate can reduce noise in the spectral areas where the film could not possibly respond.  Automatic perf detection and pattern matching are used to stitch the individual "frames" of audio together. 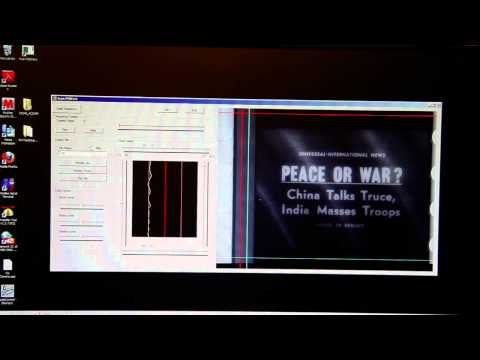